The Bradby Club finished off their Centenary year by officially opening up the new community MUGA facility which has recently been completed. Re-Activ8 Bradby project was launched earlier in the year as part of the Centenary upgrades and fundraising for the year. Funding was all secured and the project was completed in November 2019. This fantastic outdoor space was in desperate need of attention before the project and although it was seemingly well used it was not good enough for the young people accessing the Centre and the local community. The ball-court has since been completely refurbished with new fencing and 2G Astro turf resulting in an inspiring, fit for purpose facility that will serve the community for years to come. The new MUGA enables us and user groups to increase and diversify the number of sporting opportunities we can offer but it will also increase participation throughout Rugby. Sport is an integral part of the Bradby Club and will enable us to further promote healthy active lifestyles amongst service users.

The MUGA was officially opened by ex-Bradby member and project donor Richard Overson and The Mayor of Rugby Councillor Bill Lewis on the 8th December. After the ribbon was cut past Bradby members, current volunteers and staff played Rugby Safer Neighbourhood Team in a 5-a-side exibition football match. Thanks to all that took part and attended the opening.

We give a huge Thank You to all the funders for making this project possible; Richard Overson, Sport England, The National Lottery Community Fund and The central Committee of Rugby Clubs. We also give thanks to AMV Playgrounds for planning and installing the new facility. 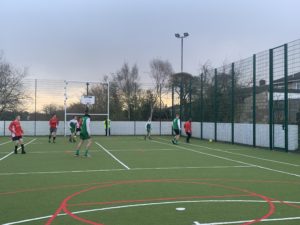